Bitcoin and global stocks fell hours after the first presidential debate between Donald Trump and Joe Biden concluded on a chaotic note.

The benchmark cryptocurrency erased a significant portion of its Tuesday gains to turn 1.19 percent lower. At the same time, futures tied to America’s S&P 500 index plunged 0.85 percent, hinting to open in negative territory at the New York opening bell Wednesday.

The sell-off across the risk-on markets happened as investors reiterated their concerns over an uncertain US presidential election. Their negative sentiment took cues from Trump’s assertions of widespread voter fraud and his vows to actively challenge the outcome. 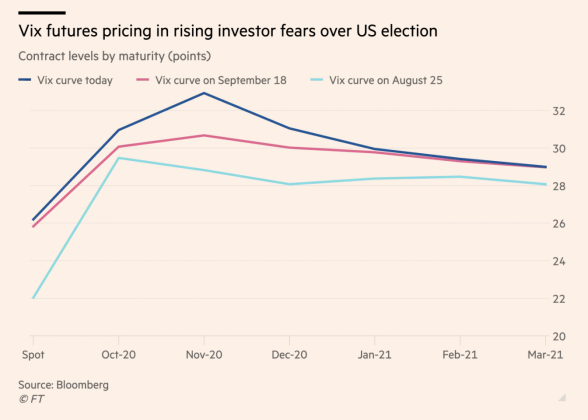 Fears of a disputed election pushed VIX futures–a barometer to gauge market uncertainty using volatility–higher. Economists, strategists, and analysts predicted a further uptick in VIX ahead of the US election that may lead to a short-term stock market sell-off.

“[Trump’s] suggestion that he would actively contest the results for weeks after the ballots are counted increases the level of uncertainty for market participants and will likely lead to higher volatility as we approach election day,” said Mark Haefele, the chief investment officer for global wealth management at UBS.

While the Bitcoin market does not concern itself with geopolitical setups, the cryptocurrency’s erratic correlation with global market sentiments since their synchronous crash in March 2020 suggests an influence. 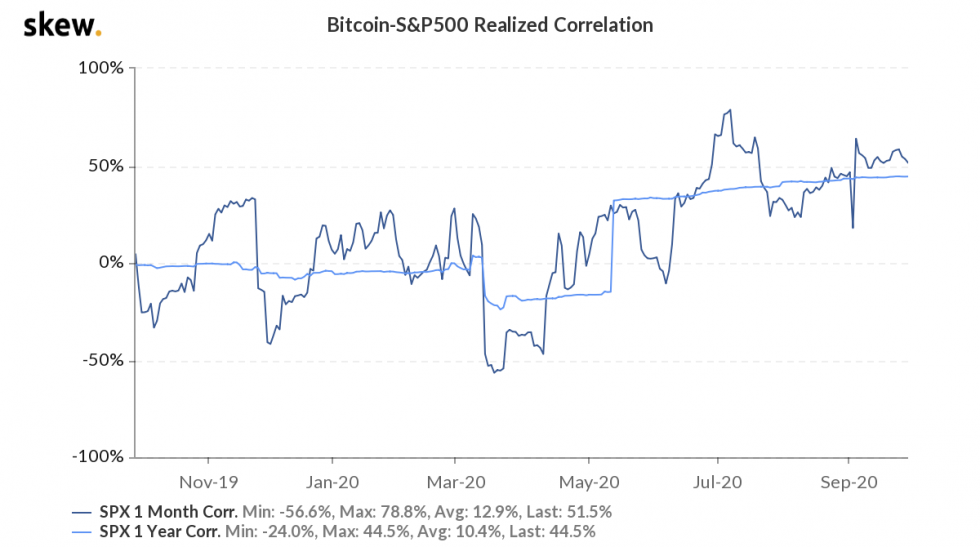 The realized monthly correlation between BTC and SPX has been rising since March 2020. Source: Skew

So it appears, traders/investors with exposure in both Bitcoin and the stock markets tend to sell the cryptocurrency to offset their losses across equities. Overleveraged traders also use their Bitcoin profits to fill their margin positions. That further creates an additional downside pressure on the cryptocurrency.

One of the other reasons why traders sell Bitcoin concerns liquidity. In March 2020, the cryptocurrency crashed alongside the global stocks because investors sought to hedge in cash. As a result, the US dollar index surged 8.80 percent during the rout.

The Federal Reserve’s expansionary policy and the US Congress’s $2 trillion COVID-19 stimulus package prompted investors to move back to stock, gold, and Bitcoin markets. The US dollar fell during aid distribution.

And now, with the package running out, and the second stimulus bill delayed, the US dollar is rising again.

Bitcoin, on the other hand, is trading almost 13 percent lower from its year-to-date high near $12,500.

The cryptocurrency now trends in unchartered territory. It expects volatile sessions ahead as long as it maintains a correlation with the S&P 500.

You Can Be a Bitcoin Maximalist and Like Ethereum, Too

Why Standard Chartered says Ethereum (ETH) could pump to $35,000

While the Bitcoin or Ethereum debate rages on between early investors and maxis, London-based bank Standard Chartered already seems to have picked a...
Read more
Bitcoin

Tuesday’s flash crash caught Bitcoin investors off guard, but the writing was on the wall

Following Tuesday’s Bitcoin flash crash, which took the rest of the market down as well, investors are wondering what happened.The CEO of Alameda...
Read more
Bitcoin

The SEC may sue Coinbase if the exchange offers crypto lending

Coinbase has publicly disclosed that the US Securities and Exchange Commission (SEC)  intends to sue the company over a new lending product, dubbed...
Read more
Bitcoin

The U.S. Securities and Exchange Commission (SEC) has refused to produce documentation regarding its “trading preclearance decisions” for XRP, BTC, and ETH. It...
Read more
Bitcoin